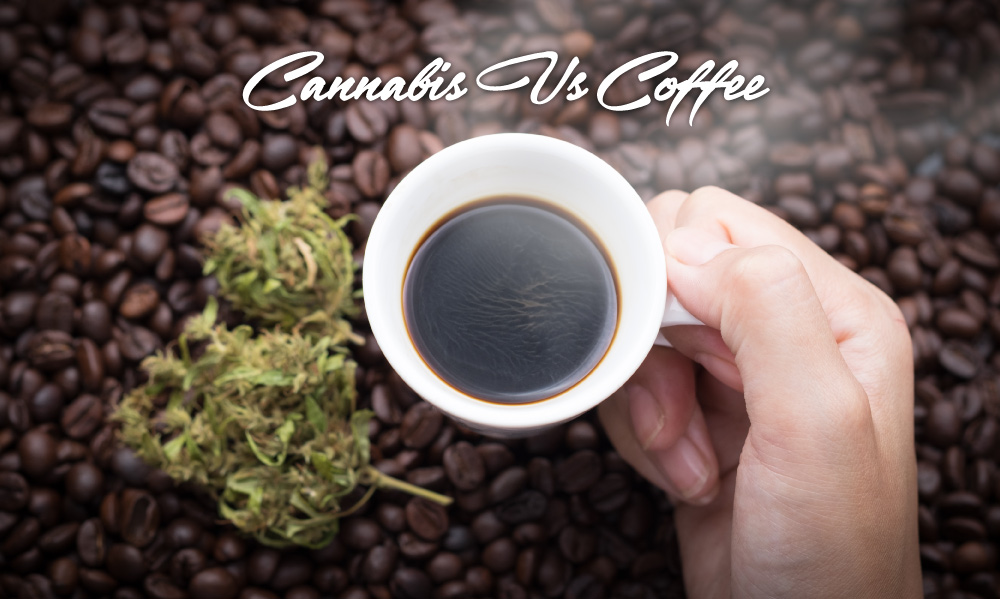 Cannabis or coffee? When choosing in public, opting for cannabis may be controversial. Coffee, on the other hand, will be accepted without batting an eye. People will easily welcome the idea of a cup of coffee or even two to three per day but will be doubtful with even a single puff of weed.

Do you know that despite the popularity of coffee and the controversy surrounding cannabis, there may be some facts that the public is not aware about regarding which is actually safer?

Yes, you read it right. Don’t be surprised if you’ll find out that maybe a puff of weed will be safer than a cup of your favorite caffeine. If you’re still having doubts, check out these facts about cannabis and caffeine.

Which gives a midday crash?

Have you experienced being suddenly exhausted during the day? That may be because of your cup of coffee. The caffeine in the coffee is a stimulant, which works to block receptors in the body that make you feel tired. When the effects of the caffeine wear of, the feeling of sudden exhaustion takes place.

Cannabis, on the other hand, works differently. A puff can make you feel relaxed. Once cannabis is consumed, there is a gradual incline in the spirits and the process of the effects wearing of is a gradual fade as well. This does not give you the headache or the sudden rush of drowsiness during the day.

Which truly wakes you up?
As mentioned earlier, caffeine gives you the pretense that you are alive during the day. The truth is that it only tells your brain to stop feeling tired. Cannabis, on the other hand, gives the push to start and finish a day without worrying of a crash at the middle of the day.

Also, the effects of coffee in waking a person up can go away after a couple of hours. Hence, another cup would be needed to counter its effects. This heightens the chances of being addicted to coffee and suffering from its side effects.

Which is highly addictive?
It is true that stopping the use of cannabis can make a person miss the feeling of being relaxed and being without pain. This often happens for people who are using cannabis for relieving pain and addressing certain health conditions. However, stopping the use of the weed does not give the person an uncontrollable urge to smoke again.

Meanwhile, coffee is highly addicting. Some people cannot function during the day really well without downing a cup or two of the caffeine. Withdrawal symptoms from caffeine include light sensitivity, irritability, nausea, headache, jitters and extreme drowsiness.

Which has medicinal properties?
The history of the medical uses of cannabis dates as far back as ancient times. Researches these days have found out that cannabis works to address various health problems including chronic pain, brain illnesses, anxiety and insomnia.

Higher doses of caffeine, on the other hand, can bring in problems rather than benefits. As the body adjusts to the caffeine, problems such as diarrhea, heartburn, upset stomach, headache and frequent urination can occur.

This does not mean, however, that cannabis has no side effects. Large doses of cannabis can bring in problems such as psychomotor impairment, cognitive impairment, panic, anxiety and paranoia. However, the toxicity level on the use of cannabis is comparably low as compared to other drugs.

Truth behind caffeine and cannabis overdoses

Do you know that there is zero recorded death due to cannabis overdose? Death due to caffeine overdose, on the other hand, is low but is increasing in number year after year. This is true because caffeine can be found not only in coffee but also in a lot of other products including tea, chocolate and energy drinks.

Agencies responsible for recording these statistics have recorded death of 1,000 to 10,000 people due to ulcers, irregular heartbeat and stress caused by long-term caffeine use. There is no recorded death due to cannabis overuse so far.

With the above-mentioned facts, it appears that the consumption of caffeine has more risks as compared to cannabis. The withdrawal symptoms and the statistics on overuse and overdose deaths alone give a clear picture as to which is a safer bet between the two.

However, this does not mean that cannabis is perfect and does not provide any risks. The secret behind getting the best out of the weed is knowing its potentials and limitations prior to its use. It is still best to get the recommendations of professionals for cannabis use to ensure maximizing its benefits.

Coffee and cannabis together 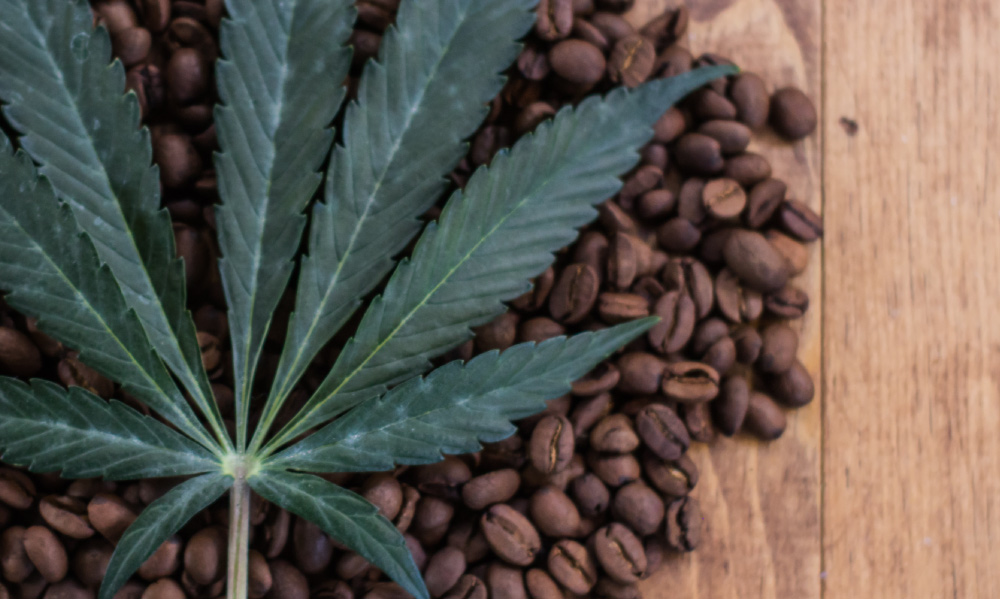 The world is not always talking about choosing between coffee and cannabis. In fact, using coffee and cannabis together is gaining more and more popularity these days. The two are now being labeled as the peanut butter and jelly in the world of drugs.

Though a lot of researches are still being conducted regarding the effects of taking coffee and cannabis together, people have been experiencing different effects already. Some people experience a more balanced feel both in the mind and the body. The coffee and cannabis give the feeling of being light and fun while still feeling relaxed and calm.

Occasional coffee drinkers and those suffering from anxiety, on the other hand, do not see coffee and cannabis as good combinations. They experience a heightened heart rate and heightened paranoia, which only aggravates their situation. Those who are regular drinkers, however, experience being more alert and feeling a more energized high.

An experiment on squirrel monkeys has shown that caffeine improves the “high,” which reduced their need to get cannabis often. However, the same study also found out that combining caffeine and cannabis make it harder for the squirrel monkeys to withdraw from its regular use.

Still, a word of caution, when considering cannabis and coffee together, always understand that the effects vary and experimenting on this may cause problems rather than a better “high.”