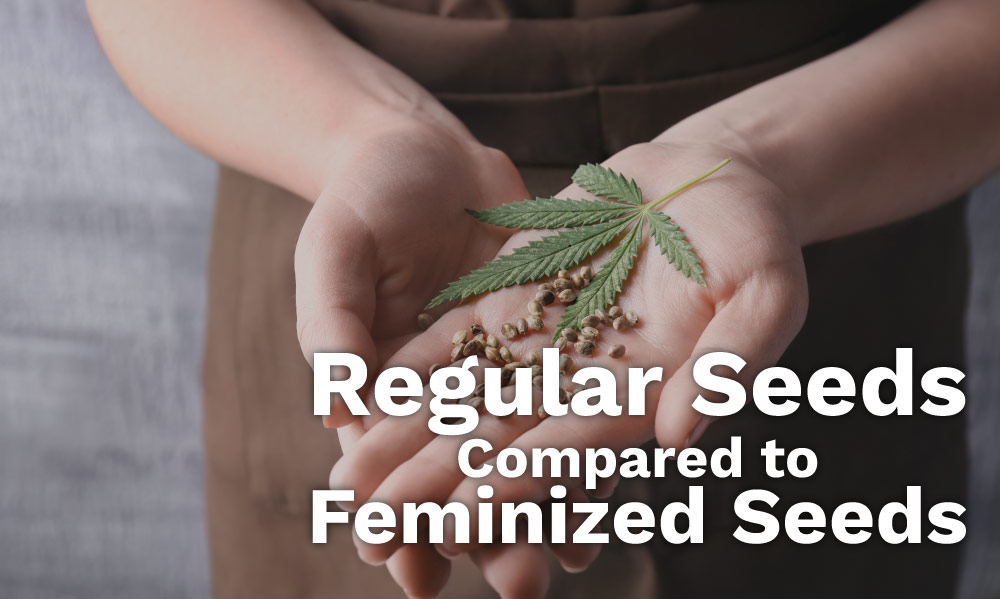 If your a beginner in marijuana growing, it could be a real challenge planting marijuana seeds particularly if you are not knowledgeable about the different seed types that you will encounter. Generally, there are only three types of cannabis seeds, Regular, Feminized and Autoflower. Regular seeds have a 50/50 chance of being male or female and feminized seeds will always be female. Autoflower seeds have specific genetics allowing them to produce bud automatically and will always be female.

There can only be two either a male or female gender. The gender cannot be identified by merely looking at the seed physically. A typical marijuana seed has a 50% probability to be a male or female plant.

A female cannabis plant produces a more dense flowering bud which is commonly the favorite of many. While male cannabis plants also produce flowers, they does not give the high effect. The pollen it contains is the pollen from male marijuana plants that comes in contact to a female flowering bud. It will change the characteristics of the female plant instead of producing huge and savory flower buds they will produce seeds.

Regular cannabis seeds could turn into either a male or a female plant at a 50% rate. This only means that a grower really cannot generate female cannabis plants in big numbers. This is the reason why regular marijuana seeds are packaged in 10’s. This is why regular seeds often come in larger quantities.

Naturally, a marijuana plant is also gonochoric like humans, these plants produce another plant that has a separate gender, one plant is male another plant is female, which in turn will also produce their own plants in the future.

A marijuana grower does not have a control on the gender of the regular seeds yield. They just produce both the male and female plants. Regular marijuana seeds are still preferred by classic marijuana growers, who respect how nature plays its role in the life of marijuana and growers who also want to create their own seeds.

Pros of a Regular Cannabis Seed

By producing male marijuana plants from regular seeds, you can produce your own seeds from fertilizing female plants.

Yield is limited. A concern with the regular seeds is not having a control of the gender of cannabis plants. This only means that after the full maturity you expect to find out that 50% of your plants are males which dont produce consumable flower. This would definitely decrease the harvest by half but you’ll be able to produce seeds.

Feminized seeds are specially bred so they produce strictly female plants only. This is done by changing their genetic makeup and each seed produced is a female plant that guarantees to produce resin coated buds for greater yield. At the same time, it is easier to identify the gender of the cannabis plant, preventing any male marijuana plants to pollinate and fertilize female plants.

Feminized seeds were discovered in the late 90s because there was a need to breed seeds which assures a female plant. At first, this kind of seed produced marijuana plants with specific quality issues, and also dubbed as unstable because they have a tendency to be hermaphrodites. But as years passed, feminized seeds have surpassed their highest level of quality, in terms of yield, the effects or the flavor. They outnumber the regular seeds, which make up 10% of the market that time.

In terms of maximized cost, feminized marijuana seeds will guarantee you a 100% all female plants, meaning all the investments you have poured in will definitely be reciprocated. All the female plants will produce buds you want not wasting any male plants in the process.

If you are the type of grower who wants to produce seeds then feminized seeds are not right for you. This is the only disadvantage of a feminized seed.

Quality of yield. With feminized marijuana seeds, there is a guarantee of 100% female plants when they reached maturity and this means good numbers in terms of yield. Some growers avoid having male plants because they have lower THC level compared to female plants. There is also the risk that the male plant will pollinate the female plants which will then produce seeds instead of flowers.

Regular seeds are already established as a more stable type compared to feminized kind. There is a situation if feminized seeds are under stress coming from light leaks or exposed to an extreme temperature, there is a possibility that they could generate male and female plants.

Cloning cannabis is a procedure which takes cuttings from a female plant to produce an identical mother plant, and getting a healthier clone is high if you use regular seeds as compared to feminized.

Are you more of the old-fashioned grower or a modern grower?

Most of the experienced growers started with the regular seeds then turn to the crossbreeding techniques. Everything can be learned in time and with due diligence of studying the different ways of growing marijuana you can handle feminized seeds in the future.

In growing your marijuana garden, you have to weigh your goal. Is it for the savory buds that could give you the high or to just produce more seeds that in turn will produce more plants with uncertainty when it comes to yield.