Solvent VS Solventless Cannabis Concentrates: Everything You Want to Know 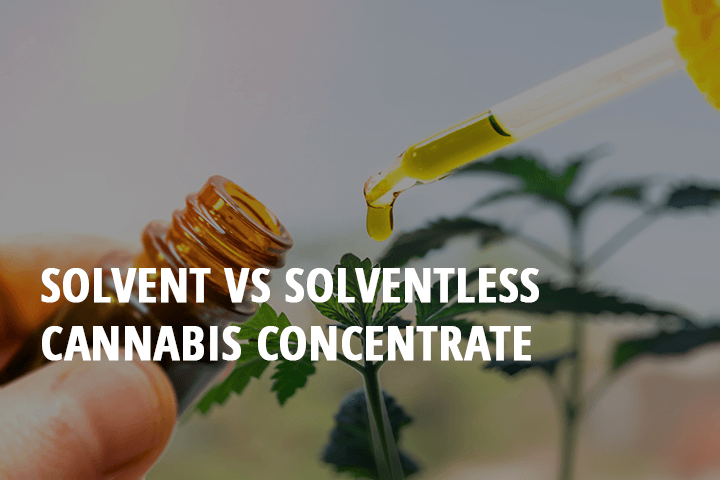 When talking about concentrates, these are products taken from the plant, cannabis. Concentrates have undergone process until the most desired compounds, especially the terpenes and cannabinoids. Impurities and other excess are removed to have the purest mixture.

These concentrates taken from marijuana showed a higher amount of the said two pounds. In fact, concentrates increase your flower’s potency. Try to sprinkle kief on the top or drop some concentrated oil to the cannabis flower before you get your joints rolled. In addition, you can take these products as it is. You can vaporize it by using a vapor which is portable or makes use of dabbing.

You can experience these concentrates through a lot of ways. They have different textures and are consumed in various ways. You will get the experience and feeling as a result of the concentrates, and the absorption rate happens immediately. The effect lasts from one to three hours, but that depends on each person. The effects of concentrates are higher than taking the flower.

Concentrates has different forms. An example of concentrate is orange juice. It tastes and smells like orange, no pulp, peel or fluids. When compared to marijuana, these concentrates give higher and quicker results, plus more ranges of consuming. Therefore, you can have broader options and find the ideal concentrate that gives you the highest and best form of results.

Well generally, a solvent is just a liquid used to dissolve substances for solutions to be formed. However, when it comes to marijuana, the solvent is used for separating the THC, a psychoactive solution taken from the flower of cannabis.

Solventless products are cannabis concentrates that don’t have residual solvent. It happens after a concentrate undergoes distillation. Distillation is separating the contaminants and the molecules. Any remaining contents of the solvent turn to 0 PPM. Solventless is done by extracting the solvent named hydrocarbon-based like butane or CO2. Then, heating and vaporizing are done to the product. The vapor is consolidated in the beakers using the cooling method. It is done to remove all the solvents. The said procedure is done over and over to come up with a refined and distilled product. That means the product is safer. It brings no harm when taken into the body. Cannabinoids are extracted and infused into concentrates coming up with potent and just pure products.

Hash is a dark block of resin which is imported from countries producing this like Pakistan, Afghanistan, Lebanon, and Morocco. It comes from North India until it slowly became popular in Europe and Arabian areas. It comes with its history. In fact, it’s produced in vast amounts by making use of traditional ways.

The process includes separating the trichomes from the plant that leads to the formation of resin into a mass. It also involves having it dried under the sun over screens that collect the heads of the resin. Then, they are finally pressed to turn them into blocks then exported. The products produced comes differently in quality. There is medium to low. It has THC of just 6-17 percent.

However, there have been issues about the imported hash. Henna, rubber, animal dung, and other unpleasant substances were added to increase the bulkiness or to make it look softer or is high grade. Thanks to the homegrown products, the demand for imported hash were lessened, and people became aware of these issues.

Let us see into the different kinds of hash:

How to Use Hash?

You can consume it by smoking or decarbing. You can put it in edibles if you don’t smoke. In fact, you can have it baked with brownies. However, if smoking is your method, you should roll it, or heat two butter knives to press the hash then inhale smoke. You can have it smoked using a bong or a pipe. Check this video on how to roll a cannabis joint

This method is done traditionally in India. It is the direct, simplest way and oldest way to produce a hash. There is no need for any equipment since it just requires rubbing the hands on the flowers to get rid of the resin.

It leads to softer and squidgy. Thus, it has good quality. It has a really dark color and is sold in balls or sticks. The monks in Hindu use this for rituals. Charas from India is said to be of being the best in terms of quality.

It is a hash done by not requiring much agitating of the buds dried on a screen of fine mesh. It is a refined method of the traditional way. The extracts pinnacle is the highest form of sifts. It is refined using silk screens electricity, which is static to have 99% of pure resin.

Also, it is made using optimum status of humidity and temperature. This way leads to producing excellent products having a color of light gold and texture like sand. Here are the types of sifting:

This hash requires the usage of the extremely cold temperature of water, agitation and ice cubes. The buds are stirred manually with the hand, or it is either spun in a washing machine. Then using the mesh bag waters are filtered, and the vegetables are separated from the heads of the resin. Finally, the trichomes are separated into sizes. The quality has something to do with the usage of material.

This hash is an extract of ice water done with frozen plants that are cut fresh. This leads to rich terpene which has the most extreme taste of hash.

The production of rosin involves the extraction of a full-melted oil having a high purity of flowers or hash with just pressure and heat. Rosin’s final texture varies differently from wax to shatter, budder and sauce. This depends on some reasons like the materials and genetic which is used, also the temperature of pressing and storage. Flower rosin is tastier, and hash rosin has higher potent. Here are the types of rosin.

Cannabis concentrates are made using various chemicals and solvents, which are organic. This includes butane, ethanol, CO2, and propane. The process involves the dissolving of the heads of the trichome in a solvent which is liquid. This liquid is taken away from the plant then evaporate into a desiccator and pump to make sure an extract of pure resin is taken.

Solvent has two groups. These are non-polar and polar. In the case of non-polar, butane is dissolved readily in the plant which is non-polar. This causes making up of the trichome heads. Meanwhile, polar includes ethanol, but this ethanol extracts the two groups taking the terpenes and cannabinoids too. The solvents are so flammable that only the correct equipment is used to do the extraction and avoid any accidents.

This concentrate is well known. The process includes extracting resins from the plant and dissolving it in butane then evaporating it under a vacuum. This is to take away the gases and just leave the highest purity of concentrate. This cannabis oil having butane has been done for a lot of years, and there has the development regarding extraction with the use of improved techniques and equipment. Therefore, only pure and less contaminated concentrates are produced.

It is a popular type of BHO taken from buds that are freshly cut. This creates an intense flavor that embodies the essence of a live plant. It has a sticky, and syrupy texture brought out by the high terpene in it.

This solvent is a current trend in terms of concentrates. It is like a sauce having high contents of a terpene. It undergoes a long but slow and low vacuuming and purging in low temperature on this extracts from the high grade of the flower. It takes more than three weeks. The oil is separated. The THC-A crashes out and crystalizes to form a diamond. The honey-like having flavonoids and cannabinoids that brings more effect.

It is made the same way except changing the butane instead of propane. This does a slight ratio extraction of waxes and cannabinoids. The boiling point is lower than the butane, so purging is easy and doesn’t affect the terpenes. That means PHO has budder texture believe to be having more terpenes.

This solvent is the cleanest concentrate without waxes. This is particularly used as a medical one which is intentional to be inhaled. Winterisation is used. It is a more complex process of dewaxing. It uses solvents which are secondary and ethanol and cold filter. However, the terpene is reduced a little, and therapeutic content is limited.

The Quick Wash Ethanol and Quick Wash Iso is the safest and simplest way to make solvent concentrates at home. This is made using alcohol. Alcohol is not so expensive and is accessible and is not flammable. Ethanol and Isopropyl are used. Just consume concentrates using ethanol. Extraction of ethanol varies depending on the material and how long the contact with the solvent is. Washing shortly leads to the texture which shatters having high purity. When filtered cold, it is fit for smoking or dabbing. Check this video about cannabis dabbing.

It is safer for having high purity and low in toxicity, less flammability, and not so high point of boiling. The extracts have more compounds than when using butane. This produces higher compounds that are undesirable. This is extracted with the cannabinoids.

This cannabis solvent makes use of well-known methods and needs big investment in terms of equipment. When using carbon dioxide to extract, the cleanest and free of residual extract would be safer than the BHO. CO2 in oil is used in products that are edible. It is blended with terpenes and put into vapes. This method is more popular.

Now that you know the differences between solventless and solvent cannabis concentrates are, hoping there will no more be confusions about the two cannabis concentrates. You have more options to choose from depending on your cannabis needs, wither for recreational or medical use.