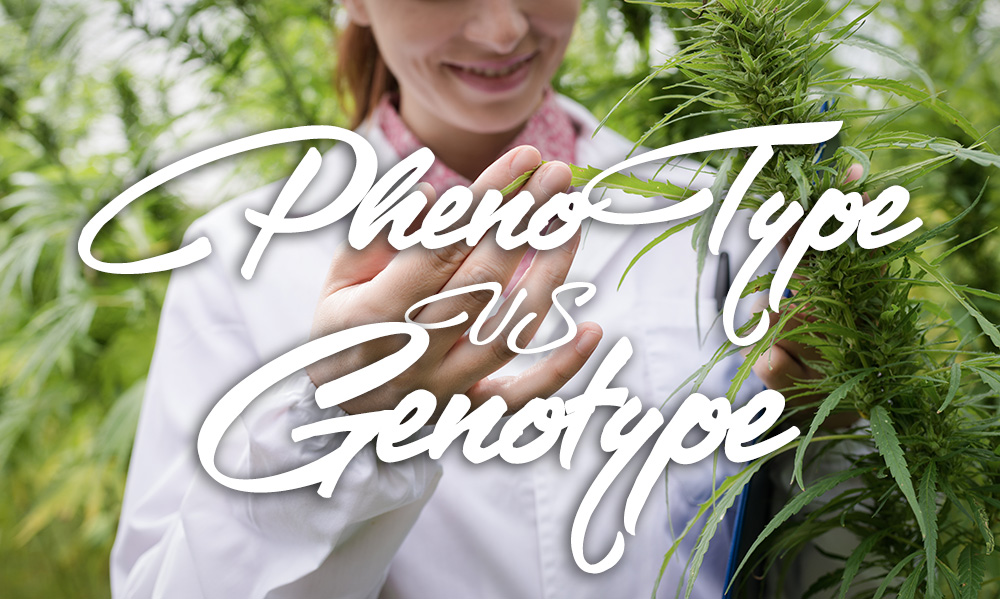 Have you ever heard some people who grow cannabis talk about genotype and phenotype? If you have, you might have thought about something scientific or something.

Well you are actually not far off. When weed breeders talk mention the words “genotype” and “phenotype”, they are actually focusing on the genetic makeup and factors that cannabis plants have.

For you to have a better understanding of what a genotype and a phenotype is when it comes to the cannabis world, we will find out what they are, how they differ from each other and their importance in growing weed.

What are genotypes and phenotypes?

All living organisms have genotypes and phenotypes. However, most of us don’t really know the difference between the two.

When we talk about genotypes, we refer to the genes that every organism has in its DNA which influence the characteristics or traits which are hereditary. Phenotypes, on the other hand refer to the characteristics or traits of an organism that we can observe. And these may include the physical aspects like shape, color and size. It can also include all the cells, molecules, atoms, tissues, chemical function and properties that an organism has.

And just like in other organisms, the same definitions are used to refer to when we talk about the genotype and phenotype of cannabis plants.

Not that we know how to define genotypes and phenotypes, let’s learn the roles they play when it comes to the physical growth, development, yield, effects, etc. of Cannabis.

Knowing these can be particularly helpful most especially if you are thinking of growing cannabis or you just wish to arm yourself with the right knowledge and information.

For you to have an easier time understanding how genotype and phenotype work in cannabis, let’s picture out this scenario.

While the plants came from the same seeds you have plants, they might have been exposed to different factors like temperature or environmental changes, resulting to them having different physical characteristics and traits. The changes manifested by the difference in appearance can be attributed to phenotype.

Why are genotype and phenotype important?

From an ordinary person’s perspective, genotype and phenotype may not mean anything. But for those who are very interested and enthusiastic about growing cannabis, these play very important roles in coming up with the perfect cannabis strain.

Those who are expert in the field of cannabis breeding understand the significance of genotypes and phenotypes in order to create new and unique strains.

These expert growers would often try to cross breed different indica or sativa strains to create a new breed that possesses qualities from both these species.

Producing new strains involve cross pollination. Two types of marijuana are needed to create the desired strain or hybrid. This involves a female plant and male plant to freely pollinating in a very controlled setting or environment. Whatever is produced during the cross pollination process becomes the “mother” plant of the new hybrid strain you have created.

To give you a better idea of how this happens, take this for example: a breeder who cross breeds indicas and sativas might himself producing buds that grew in a shorter period (a characteristic of indica) that has the euphoric high that sativa strains have.

Depending on their end goals or objectives, cannabis breeders can customize the strain they want to produce. It’s just a matter of understanding how it all works in order to get the desired results.

It’s important to know and to understand the traits of the plants and their gene pools so that you would be able to create new strains with their own unique characteristics.

Also, with the creation of new strains, it just means that cannabis use is always evolving and improving. When you have developed new strains, it keeps users at the edge of their seats as they know that they have something new to try and that the quest for the best strain that could give them the best hit continues.