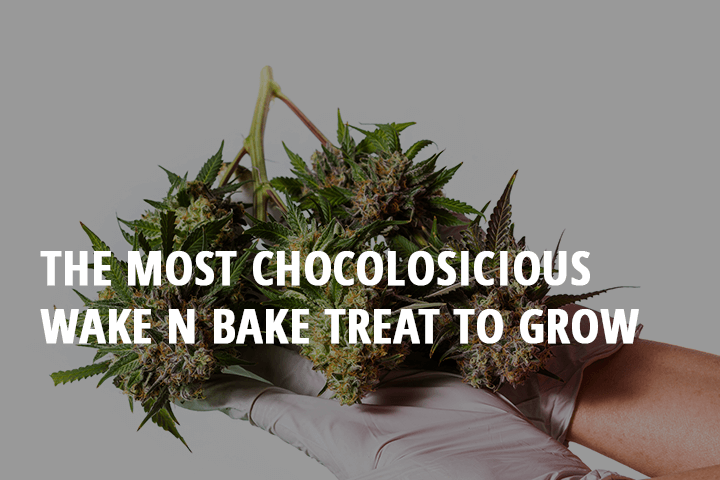 When you think of marijuana strains, it is normal for you to be reminded of green leafy plants that have an earthy and skunky kind of scent and taste. After all, marijuana is a plant, first and foremost, and it is only natural for it to remind you of something that comes from the earth and grows naturally in the wild. That is a perfectly normal kind of reaction to how marijuana smells and tastes like especially if you are not well-versed and learned in the cannabis community.

However, what you should also know is that different marijuana strains have different scents and flavors. It is not always about them making you feel a certain kind of skunky or earthiness but it is also about the type of experience they give your nose and your taste buds. In that sense, it is equally important for you to factor in how the marijuana strain takes over your sense of smell and taste. Chocolope is one of those strains.

is not only about its clever name, which is what makes it sell really well especially in places such as California and Colorado. It also is not just about its effects, which make it one of the most well-reviewed strains out there.

What actually makes Chocolope the popular strain that it is is its overall combination of aroma, taste, and effects. Possessing a scent and flavor profile that lives up to its name, this strain is considered one of the most perfect wake´n´bake buds on the planets because it is not only a chocolatey treat but is also very similar to coffee in both its taste and effects. But, for you to get to understand more about this strain, it is best for you to actually read our review.

Chocolope cannabis strain is a beloved world-famous strain that is almost a hundred percent when it comes to its sativa genetics. It is a strain that is popular wherever you go and has made its name in Amsterdam, where it actually originated from. Chocolope was once named “Strain of the Year” back in 2007 and has only become an even bigger favorite among cannabis enthusiasts over the past few years.

As mentioned, this strain was born and raised in the Mecca of marijuana, the city of Amsterdam in the Netherlands. That is where it first started to make waves as a strain that became a great choice for coffee shop lovers all over town. That said, Chocolope became an instant hit in the coffee shop culture in Amsterdam and became one of the most sought-after strains by coffee shop goers because of how it tastes and feels like an actual cup of coffee especially when taken early in the day.

Chocolope is a strain that was developed by crossing Chocolate Thai and Cannalope Haze. It was specifically bred using those parent strains because the breeders wanted to make a strain that is very similar to coffee in both flavors and effects. And because it became an instant hit in the Netherlands, it did not take too long for Chocolope to begin to make a name for itself in America. During the 1980s, it was one of the most popular strains you can find in the United States as well as in Europe. Now, it is a cultural icon in the coffee shop scene in Amsterdam and is treated more like a necessity because of how great it is as a wake´n´bake bud to take early in the morning.

Chocolope stands as one of the most aromatic and delicious strains there is on the planet especially if you want a bud that has a unique type of scent and taste profile. It is a type of strain that is unlike any other you might have encountered in the past because there is almost nothing similar to how it smells and tastes. In fact, as previously mentioned, it is quite similar to coffee and chocolate when it comes to the way it hits your nose and your taste buds. In short, it is a special experience for your senses.

First off, Chocolope has a scent that immediately hits your nose with an array of fragrances that are very similar to that cup of coffee you take early in the morning. It has a rich scent that is full of earthiness but in a chocolatey and coffee-like kind of way. It actually is quite reminiscent of the scent of freshly roasted coffee. You will most likely feel like you are walking into a coffee shop the moment you open a bag of Chocolope buds

Of course, what makes Chocolope live up to its name is that it also has a scent that can remind you of dark chocolate and not the kind of chocolate that is sweet and is mixed with milk and sugar. In a sense, it is more like the pure kind of chocolate that has not been mixed with other flavors and substances. And as you enjoy this chocolatey coffee fragrance, Chocolope eventually transforms into an earthy and pungent experience that is already very similar to what classic and traditional cannabis strains should smell like.

As to the taste, Chocolope stays true to its name and its reputation as a strain that can give you a coffee and chocolate-like experience. What that means is that it is a very delicious strain that can give your taste buds something they have not experienced in the past. It has a taste that is difficult to resist and is more than likely a better treat for your senses than its scent.

That said,Chocolope’s flavors are full of hints of chocolate that tends to be quite sweet. It is like a blend of chocolate and vanilla all in one package while retaining its coffee aroma. Imagine yourself going into your favorite coffee shop to order your go-to dark-roasted drink with a splash of chocolate and vanilla. Inhaling Chocolope through your throat gives you a similar kind of experience.

All things considered, Chocolope is truly a rare feast for both your nose and your taste buds. It is a strain that captures the experience of what it is to go to a coffee shop because of its hearty notes of coffee and chocolate that is blended with the sweetness of vanilla. Even if you do not enjoy this strain’s effects, its aroma and flavor profile alone is enough for you to go looking for this strain every time you are craving for a bud that is deliciously balanced.

If you think that Chocolope’s coffee shop experience starts and ends with its scent and taste profile, then you are dead wrong. This strain does not only give you the same kind of sensation and feeling that you would have when you are in a coffee shop but it also makes you feel like you actually had a strong cup of dark-roasted coffee early in the morning.

As a 95% sativa strain, Chocolope is a bud that will not disappoint you when it comes to making you feel invigorated and energetic. This strain starts by hitting you with extremely cerebral effects that will instantly uplift your mood to make you happy and euphoric. At the same time, this buzz invigorates your mind to make you feel focused and mentally energetic. That means that it helps out in waking your mind up early in the morning.

The great thing about Chocolope’s mental effects is that it is not very psychoactive. What that means is that the sensory distortions that you will feel will be minimal so that you will be able to stay functional throughout the duration of this strain’s high. You will be able to do your tasks and your activities with the focus, motivation, and inspiration you need without having to worry about your mind racing since it is not a very psychoactive strain.

At the same time, Chocolope is also excellent at giving your body the necessary energy it needs to keep up with your invigorated mental state. While it is not a strain that gives you an amazing jolt of physical energy, it can still make you feel energetic enough to do different kinds of mental and physical tasks without feeling fatigued. This means that you can take this strain to start your day well and to finish your tasks quicker. It may even be an effective bud to use prior to going to the gym or, at the very least, for a good stroll around town.

Chocolope is an excellent wake’n’bake bud because of how it instantly wakes your mind and body early in the day to make you more functional and productive. This is the reason why it is so similar to a cup of coffee both in terms of aroma, flavor, and effects. So, if you want to skip the acidic effects of that cup of morning joe, you might as well puff a bud of Chocolope. And what makes it better than coffee when it comes to giving you the energy you need to stay functional is that it does not come with the jitters and the palpitations you will get when you had too much caffeine. However, that does not mean that you should overdose yourself with Chocolope. There are still a lot of things you have to consider before you try to take more of this strain than what is needed.

As an early-morning sativa strain, Chocolope is best used during the day. Use it as a wake’n’bake bud shortly after you wake up if you want to start your day with a positive mood and the right energy. Try not to use it during the evening unless you are planning to stay up late because of how it can make sleeping quite a challenge.

Probably the only non-coffee part about Chocolope is its growth info. However, even this aspect of this world-famous strain makes it just as appealing as do its flavor and effects. The reason for such is that Chocolope is a strain that is not very difficult to grow. Most growers will find that it is a pretty easy strain to grow. Moreover, you will be surprised to know that this sativa is a rewarding plant that yields an abundant harvest of fragrant and tasty buds.

Beginners can find success when attempting to grow Chocolope because of how easy it is to cultivate this strain. It will not demand a lot of your time and attention since it pretty much takes care of its own self so long as you give it the minimum care it needs and the conditions it requires to grow well.

It is advised that you should grow Chocolope indoors instead of outdoors because of how this strain is susceptible to mildew and molds. As a sativa, it thrives well in a climate that is quite warm but the one thing you should consider is that it is better to grow it in dry conditions. Nevada or Southern California can be good examples of places to grow Chocolope outdoors because of their warm and dry conditions. However, if you happen to live in an area that is quite cold or somewhere that has a tropical climate, it will be better for you to grow Chocolope indoors.

Keep Chocolope under warm light to give it the energy it needs to grow well. If you do things right, you can expect this strain to be ready for harvest in about nine to ten weeks. Chocolope can give you about 21 ounces of buds when grown indoors. However, growing it outdoors can yield you up to 32 ounces per plant.