14 Kinds of Weed Concentrates You Want to Know 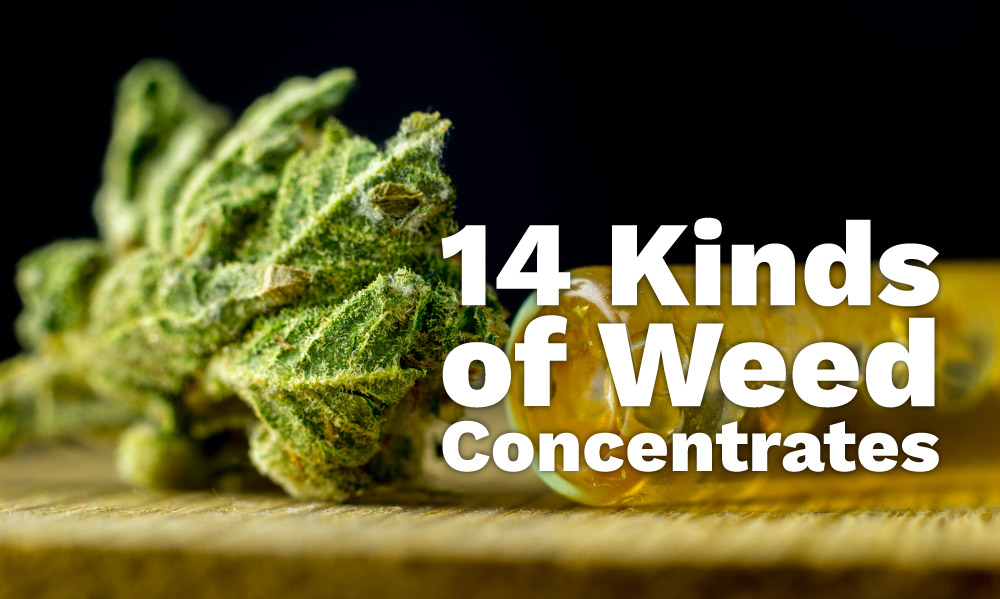 Weed concentrates, otherwise known as dabs, come in several sizes, shapes and forms. They are usually described as sticky, which means that the concentration of weed resins can be stable or hard. The consistencies differ too, from sticky saps, hard shatters, dry crumbles and others. In terms of color, they can range from being opaque to being translucent.

There are a number of reasons behind these differences. Factors including moisture, temperature,and physical agitation enter the picture. When solid THCA is agitated, the substance is precipitated from oil, which crystallizes afterwards. Hash oil is then converted from a single-phase substance, turning into an amorphous and multiphasic substance, turning from clear to opaque.

At the same time, terpenes also play a huge role in the in the overall result of the concentrates’ consistency. This is because terpenes act as a solvent. With more terpenes present, the more liquified your expected product will turn out to be.

The method in which you deal with each type of concentrate is also difference become some of them are intended to be stuck to a tool. Others, on the other hand, need to be scooped using something shaped similar to a spoon. If you do not have one, you can use a multiuse dab tool to accommodate the various situations required.

Here are 14 kinds of weed concentrates that you would want to know about:

Simply called as RSO Rick Simpson Oil is a famous type of weed concentrate primarily used for medicinal reasons. Compared to other concentrates, it is sourced from female plants with more than 20% of THC, with both the leaves and buds being used. This also means that Rick Simpson Oil features a high percentage of THC, thus resulting in the users to experience a number of psychoactive effects.

RSO usually come in the form of small pellets which are placed beneath the tongue where they are absorbed easily. As an alternative, they may also be vaporized or swallowed. Most weed users usually recommend starting with a low dosage at first, most especially if you are not really used to consuming THC yet.

Budder as a weed concentrate, is often considered as the most sought after and the cleanest concentrate in this list. This concentrate got its name from its resemblance to regular butter in terms of consistency. Budder is amazingly potent and pure, with an average content of 90% THC and 99% purity. This is challenging to make because it needs to be whipped vigorously while purging. This is also one of the reasons why budder is more expensive than others.

Sap features a consistency that is quite similar to chocolate, making it one of the most challenging weeds concentrates to deal with, particularly on a hot day. This is also a reason why it is recommended to use indoors, in cool and well-ventilated areas, where there is less likelihood of melting.

Similar to real chocolate, sap will also melt when held using the fingers, which is why it is also recommended by experts to use a tool when handling it. Sap comes with a similar potency to waxes out there. This means that if you are a beginner, it is very important to be careful as you use it.

Pull and snap has its name traced from the unique way in which the small dabs of the material are separated. You just need to pull and twist it until the dabs break away. Afterwards, you can roll the dabs into little balls that you can use in your vape. You can also flatten it out, dab rig, and smoke it outright.

What makes wax concentrates unique is that they come with really high THC content, along with several other cannabinoids. In fact, they are usually higher than trim runs and regular buds. This means that they have to be carefully handled. If you are not yet used to vaping substance that is so potent, it is recommended to start slow.

Since wax is quite runny, it is quite challenging to handle it without the right tools at hand. The most common method of handling waxes is using a personal vaporizer or dab rig. One disadvantage, however, is that waxes are usually four times more expensive compared to the buds where they were sourced from.

Crumble is another type of weed concentrate which is made out of butane hash oil. The product comes as a result of purging the oil inside a vacuum oven for a period of time. For best results, do so at lower temperatures. While doing so, crumble starts developing a soft consistency but is still brittle enough that it will literally crumble when handled.

Since crumble is challenging to handle, it is used often in vapes or dab rigs. If you need a concentrate that is highly potent, yet still flavorful, then crumble might have been the best option for you. It contains a lot of THC content, along with other cannabinoids.

If you are familiar with the consistency of a caramel candy that looks like a glass type concentrate, then you now have an idea what shatter is. It features a glass consistency which is why it got its name. It has mostly been created from PHO and BHO extracts, with high levels of both THC and CBD.

Shatter is known because of its amazing purity, even though there may also be some variations to this concentrate. It can be transparent, with low THC and CBD, or even murky and have a higher content of active cannabinoids. Shatter is not easy to smoke because of its very high point of evaporation. In general, there is a need to use a butane torch, or a nail rig which can be heated up to 600F before vaporizing shatter.

Full melt is one of the hash derivatives which can be created by using either water and ice or a dry sieve process. The resulting product will surely standout, regardless of the type of method that you use.

Full melt is a combination of brown sugar and sand when talking about the texture, though the potency is very special, allowing you to get the highest cannabinoid and terpenes levels out there.

This is also the main reason why it is quite challenging to find full melt. It is solvent-free, super clean, and free from contaminants. The best method to use it is using either a dab rig or a vaporizer.

Dry sieving is a method of extraction for kief. It creates a powder-like substance which is gathered in the last compartment of the weed grinder. Usually, it takes a long time to gather just an ounce of the concentrate, but the reward is worth it – the result is very potent. Kief is otherwise known as hashish.

This weed extraction method is also similar to using a grinder. Buds, as well as other plant materials,  are taken and rubbed over a fine mesh. Those smaller, hair-like substances collected underneath are trichomes, where most of the cannabinoids and terpenes are stored. You can either directly use the kief by vaping or smoking it, or create other types of concentrates with it.

This is a method of extraction which is otherwise called as supercritical fluid extraction. Among the advantages of using this extraction method is that it is mess-free, solvent-free, and quite expensive. It is also popular because the product is free from toxins, while still being able to retain its terpenes rich flavor.

Cannabis extraction of CO2 is done by using specialized equipment. The gas is forced several times right through a container weed cannabis. As the gas passes through the weed, it liquifies, picking up terpenes and cannabinoids. After the process is done, the residue serves as the product.

CO2 extraction is very expensive, but it often results in some of the most amazing kinds of weed concentrates currently known. As such, it is used often by serious manufacturers who usually create high-end concentrates.

Butane Hash Oil is a weed concentrate created using butane, which serves as a solvent, extracting the terpenes and cannabinoids. The process is a simple one but can be dangerous. It is quite popular among users because it is possible to make concentrates high in THC. It is also utilized in the production of other weed concentrates, including budder, hash, nug run, and several others.

Since the method of extraction is with butane, some people may not be comfortable with using it. With this said, BHO often comes with a harsher taste, which means that if you are dealing with lung issues, you might want to choose other concentrates produced with other methods of extraction.

Propane Hash Oil describes the method of extraction as one that uses propane, instead of butane. The process if almost the same, though some users prefer PHO because it can be used to create a high-quality budder through vigorous whipping.

Seasoned PHO creators also note that it is also possible to gather more terpenes while getting fewer residues with the use of propane, though it still depends on the type of strain that you use.

Nug run is a type of weed concentrate which is created by using specific parts of the cannabis plant, especially the nugs. They are high-quality nuggets of weed buds, and flowers, which are amazingly filled with cannabinoids and terpenes.

A nug run is highly potent and very flavorful. Weed fanatics love it because of its taste, which is also the same reason why it was given the name “nectar”. A disadvantage, however, is that this kind of weed concentrate can be somewhat pricey.

Big operations create a huge amount of weed concentrates of different types. They are usually left with leaves, stems, tiny nugs, and more. Rather than throwing them all to waste, they end up creating a lower quality of weed concentrate. The concentrates created out of these materials are called as trim run.

While trim run does not really result to concentrate with many cannabinoids compared to other types of weed concentrates, it is still potent enough to satisfy your needs. In fact, it offers a good high, especially for occasional users.

Another advantage is that it is also considered as one of the most affordable THC concentrates currently available on the market.

With the options on weed concentrates mentioned above, you can definitely say that there will always be an option that will fit your needs and requirements. At the same time, there are also several other weed concentrates that are available these days. In fact, you can even make your own one if you want to. The options above are among the most popular ones. Your option may be influenced by certain factors, including your personal preference, and of course, your budget. These weed concentrates may be available ready to consume. You also have the option to make your very own concentrate and make some alterations depending on your taste.